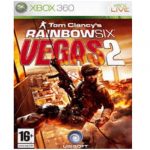 Gears of War 2 is the eagerly anticipated sequel to the 4.5 million selling blockbuster third-person tactical action game that became one of the most popular Xbox 360 games in history. This time, Marcus Fenix and Delta Squad are poised to deliver a bigger, badder, and more intense. experienceThe wait is over, Gears of War 2 has arrived. Ever since the original was released, fans have clamored for this sequel. Developed exclusively for the Xbox 360 by Epic Games, Gears of War 2, which has already garnered several awards, picks up six months after the events of the blockbuster original Gears of War. Players are thrown back into the role of Marcus Fenix, leading the battle for humankind’s survival against the Locust Horde. With innovative third-person tactical action gameplay and unsurpassed high-definition graphics, Gears of War 2 is a must-have game for the Xbox 360.