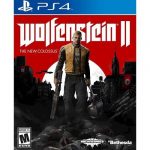 Survive the zombie swarm in four-player cooperate action with an arsenal of guns and gear.