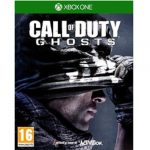 dark, gritty future where a new breed of Black Ops soldier emerges and the lines between humanity and military robotics is blurred. This is the future of combat in Call of Duty®: Black Ops III.

CAMPAIGN: The Black Ops III campaign is designed for four-player online co-op and re-playability on the next-gen, with players encountering the epic cinematic moments Call of Duty® is known for in new open-area engagements designed to allow players to approach the game with a different strategy each time they play. Every player is completely customizable: from weapons and loadouts, to abilities and outfits, all with full progression systems and a personalized armory to show off accomplishments, providing a constantly-evolving campaign experience.

ZOMBIES: Since the introduction of the original Zombies Easter Egg in Call of Duty®: World at War, Treyarch has been nurturing a global following of pure Zombies fans. Black Ops III answers their call with a signature Zombies offering, complete with its own distinct storyline and a full XP-based progression system for players that adds depth and re-playability to the engaging gameplay Zombies fans have come to expect.