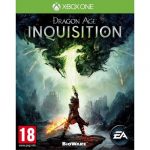 XBOX 1 Dragon Age Inquisition
BIF
ETB
RWF
SOS
TZS
UGX
0 out of 5
( There are no reviews yet. )

After the success of the Xenoverse series, it’s time to introduce a new classic 2D Dragon Ball fighting game for this generation’s consoles. DRAGON BALL FighterZ is born from what makes the DRAGON BALL series so loved and famous: endless spectacular fights with its all-powerful fighters.